A lot of us have seen numerous images of the ancient divine deities carrying ‘handbags’ also known as ‘purses’ in their hands and have wondered what they were. Why were there so many identical or very similar bags or purses in various historical epochs on different continents?

Oldest Depictions of the ‘Handbag’ 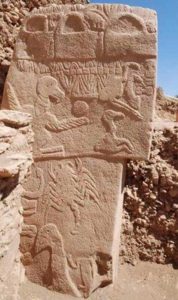 One of the earliest instances of the handbag motif can be seen in the ruins of Göbekli Tepe, located at the top of a mountain ridge in southeastern Turkey. Dating back to approximately 11,000 BC, Göbekli Tepe is one of the oldest temple complexes ever discovered (Tinfoil Hat, 2014). The exact purpose of the mountain sanctuary is unknown; however, it appears that temple may have served as a site for religious sacrifices (archaeologists unearthed many butchered animal bones). The walls and pillars of the temple are decorated with finely carved animals, gods, and mythical creatures, perhaps in an effort to portray the many different creations of the cosmos. Amidst these other carvings are three handbags.

Experts believe that early religions worshiped the fundamental elements of life on earth. Therefore, “the three Göbekli Tepe handbags, taken as an early form of those icons, could be said to symbolically define the site as a temple” (Scranton, 2016).

What are you looking for?